The services of the Government of Karnataka like the caste, income certificates and social security schemes were earlier delivered to the Citizens at the Taluka Level. The Citizen had to give written applications along with supporting documents for the services required at the Taluk Office, which would then be manually processed and sent to the field officials for verification, the report was processed and the final manual certificate was issued by the Tahsildar at the taluk office. This process was cumbersome and expensive (citizen had to travel to the taluk office twice and may be in between also to know the status) and was time consuming.

This continued till 2006 when the e-Governance Department decided to provide the services through RDS (Rural Digital Services). RDS was envisaged as the first computerised citizen service delivery in the country that provided the citizen an IT interface, to avail the services offered by Government at the State, District and the Taluka Head Quarters at the Hobli level. The RDS aimed to bring the administration closer to the common man and also to provide affordable, speedier and efficient interface between the Government and the Public. In this regard the Nemmadi Project was launched through 800 Tele centers at Hobli locations through a Public Private Partnership model in 2006. The telecenters would deliver Government services such as issuing the copy of the RTC to the farmer, delivery of Caste certificate, issue of Income certificates, applying for Social security schemes and 29 other similar services of this type. Under this scheme the applications along with supporting documents were received at the telecenters, digitally entered into the system, processed in the taluka back office and finally the certificates were printed and issued at the telecenters.

Though the scheme was successful in serving the people to a large extent, it could achieve only limited success due to non coordination among the private partner and local Revenue officials and other functional problems like inexperienced, in adequate operators, lack of power back up, software problems and logistics problems and so on.

In order to overcome the above said issues, the Government decided to handover the project to the Revenue Department in 2012. Making Revenue services accessible to the citizens at the Hobli level through transparent, reliable and affordable means provided by the Government mechanism without private partner was the main purpose. These centres at the Hobli level have been named as Atalji Janasnehi Kendras. 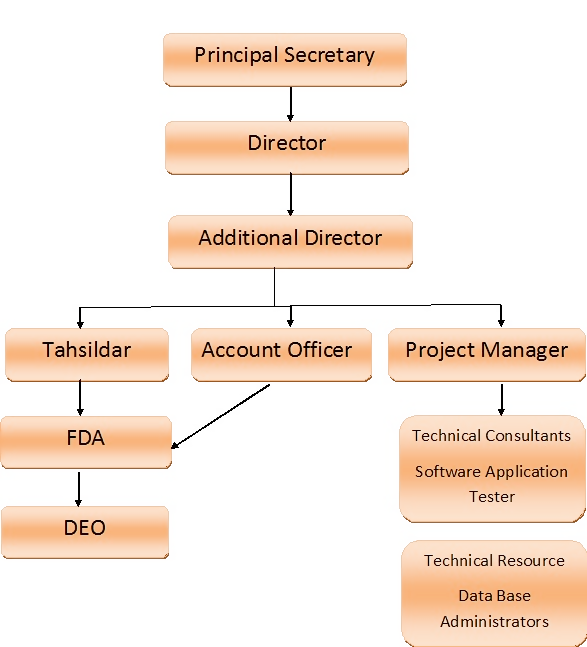 The Deputy Commissioner of the District is the overall incharge of the Project at District level and has been delegated full financial powers. This is in contrast to the earlier system of centralised management by the e-Governance department through the private agency, where the District administration was only a spectator & had no role to play in the administration/ management of the centres.

The Deputy Commissioner would be assisted in Technical matters at the District level by the District Consultant, who is a qualified engineer, totally dedicated to the project, taken through an outsource agency or on contract basis by the Deputy Commissioners. This not only ensures that functional problems in the Atalji Janasnehi Kendras are addressed first at the District level & only the serious issues are escalated to the state level, but also provides for speedy complaint redressal.

Each Atalji Janasnehi Kendra is staffed with a Deputy Tahsildar, Case worker, Operator and an Attender, with a Village Accountant and Revenue Inspector kept as reserve, all of whom have received basic & software training. This is in contrast to the Nemmadi front office which had only a private operator, who had not received any formal training & there was no provision for reserve staff.

Under the Nemmadi project, the telecentres were solely manned by the operators who were hired & controlled by the Private agency & the functioning of the centres depended on their presence, but in the new system the Data entry operators are procured through an out sourced man power agency & completely under the control of the Deputy commissioners at the District level and they work under the supervision.

Each Atalji Janasnehi Kendra has been provided with latest, high end computers (three), printer (one), webcam (one), bio-metric device (one) and one 8 port switch. There are hardware consultants at the District level provided by the hardware vendor who is under a contract to maintain the hardware. Thus ensuring the system downtime is considerably reduced. The old Nemmadi telecentres had a five year old computer, Printer & webcam provided by the private agency & was centrally maintained.

A helpline has been established for the Atalji Janasnehi Kendras at the state level to offer assistance with regard to hardware related issues.

One of the main drawbacks of the Nemmadi project was the non functioning centres due to power fluctuation/power cuts, due to which the citizen had to make repeated visits to the centres to apply & collect the certificates. This has now been corrected by providing solar powered UPS and battery systems to all the Atalji Janasnehi Kendras with five year maintenance. These systems provide uninterrupted power back up for six hours every day in each of the centres thus ensuring continued service to the citizens.

The new Nadakacheri application developed by NIC is user friendly and is a web based application. The application has been hosted in the state data centre and operates through a centralised architecture. There is no concept of separate front office, back office, local server or data replication. The maintenance is only at SDC & the deployment of modifications can be done in a couple of hours. It is to be remembered that the Nemmadi software was developed by NIC & Micro Soft & had the client-server architecture. There were major problems in data replication & frequent data loss during replication.

The connectivity has been provided by BSNL through VPNoBB to all the centres. This ensures that a dedicated line with 512 KbPS is provided for the Nadakacheri data. The secondary connectivity through WiMax/VSAT will be provided based on the performance of the primary connectivity.

1. At the time of generating the application the operator collects the application charges from the applicant.
2. At the end of the day the operator hands over the amount collected to the Deputy Tahsildar.
3. Provision is made in the Software, that the DT can view the number of transactions for the day & the amount to be collected.
4. The DT has to reconcile the same & verify that the operator has handed over the exact amount that had to be collected.
5. The Deputy Tahsildar then goes to the nearby Nationalised bank with Core Banking Services (CBS) and transfers the amount straight away to DCs account.
6. The amount is transferred through CBS to the Deputy Commissioner’s Nemmadi Account.
7. The DCs have already opened account in SBM and the same number has to be provided by the DCs to DTs.
8. The DTs should not open any account in local bank.
9. DTs should fill in the form of NEFT straight away and handover money to the Bank official with filled in NEFT form.
10. DT should mention the account number of the DC so that the money will be transferred by the Bank immediately to the account of DC everyday.
11. It is again to be noted that DTs are not to open any bank account in the local bank and transfer the money to DC account using NEFT daily.
12. The case worker / the Deputy Tahsildar of the Nadakacheri will maintain the cash book.
13. DC will meet the daily expenses of the Nadakacheris- including stationery, cartridge, electricity & BSNL charges & the operators salary from this fund.
14. At the end of the month the excess amount in the DCs account will be transferred to the Nemmadi Directorate account.
15. DC will have to monitor the account weekly.
16. Monthly reconciliation will be done by the Directorate.